There is no debating that any good old Irish tune gets you in the mood to Guy Around and enjoy some Guy Sodas of the Guinness variety. Irish or not, the music has to put a smile on your face.

I think most people still think that Ireland is one nation, obviously we can debate this but now is not the time. The average “Delco” Joe probably doesn’t know that there is such a place called Northern Ireland that’s governed by the UBK (United British Kingdom). It’s one of four countries that make up the UBK along with England, Scotland, and Wales (I think it should be called Walesland). There is a border between the Republic of Ireland and Northern Ireland. Ireland’s currency is the Euro where Northern Ireland uses pound sterling like the rest of the UBK. These are some basic facts for you readers new to what the Northern Ireland really is.

When I was living in England I wanted to visit Northern Ireland. I flew into Belfast, the capital of Northern Ireland and in a later post I will write about this gem of a city. Today I want to focus on the coastline, hundreds of miles of green hills, jaw-dropping cliffs, and rocky beaches. If you truly Guy Around you probably love a good road trip and this is a perfect one in Northern Ireland. My visit was pretty authentic, I visited my aunt, cousin and his family who visit Northern Ireland pretty often. They would host kids from Belfast in Philadelphia for a summer as a part of a program to help the kids from Belfast. My cousin and his family would go to Belfast almost every year to see the kids and keep up with them. I had the opportunity to stay with one of the families which made my experience more authentic than the average traveler, but my recommendations can still help you Guy Around the coastline.

I would suggest you “hire” (rent, but its the British way to say it) a car and spend a day driving the Causeway Coastal Route. This route has everything from Castles to distilleries to Game of Thrones scenes. Remember, since Northern Ireland is part of the UBK they drive on the LEFT side of the road. You can still hire a car with a US license but I suggest you get an International Drivers permit wherever you are coming from. These are useful where ever you travel too, most countries accept these as legal driving licenses. It may seem intimidating driving on the “other” side of the road, but if you really Guy Around you would not be intimidated. I would not join a tour, you can navigate this route pretty easily, even for you new travelers. Be on the lookout for a future post about getting a drivers license in a foreign country that drives on the LEFT side of the road.

Along the Causeway Coastal Route, there are a few must-sees in my opinion. You can not visit the UBK without visiting a castle. When most people think of castles, they think of giant Disney type of castles when in reality, they really are nothing like that. Dunluce Castle is worth a stop along the coast, mostly made of ruins now, it’s still impressive as it was built on the edge of a cliff.  In its prime, it must have been a very cool place to live.

Another worthy stop is taking a walk over the Carrick-a-Rede Rope Bridge. You may feel like the bridge could break or flip over at any point because of the heavy coastal winds, but I went over it and survived. If you are scared of heights, I would not recommend trying to cross the bridge. 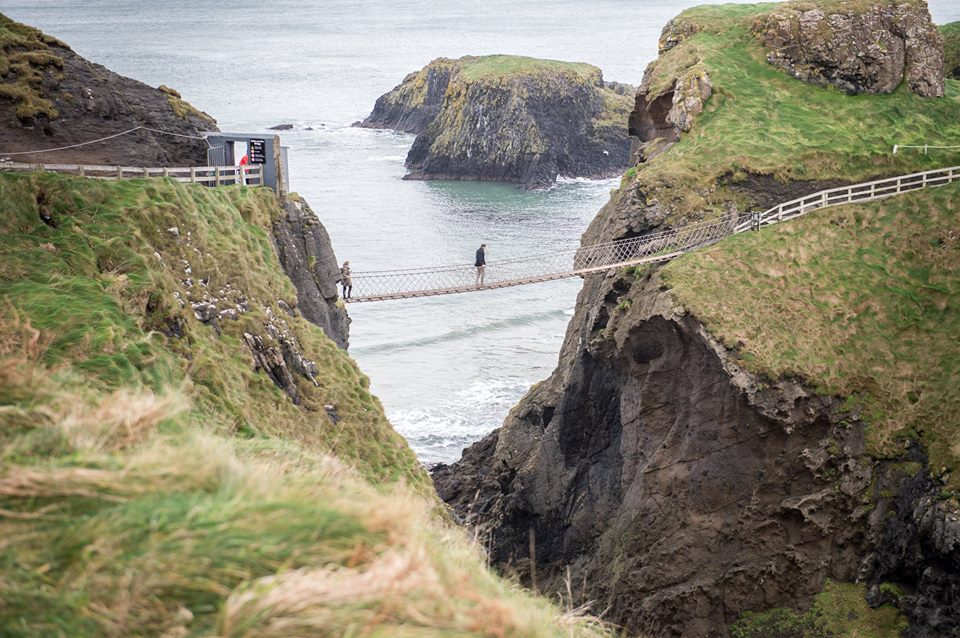 My last recommended stop, granted there are a few more you could check out, but these are the big 3, is the Giant’s Causeway. I know that it is the only UNESCO world heritage site in Northern Ireland and perhaps its most famous attraction. I can best describe Giant’s Causeway as a series of hexagonal rocks coming out of the ground that looks like a path out to the sea. There is a legend behind the site, one I don’t think I am suited to tell because I am not a local. This is a site where it is free to visit, but you have to pay for parking and what not. No tourist attraction is really ever “free”.

Northern Ireland is not a place that comes to most peoples minds as a “place I need to visit” when thinking of a Euro trip. I would highly suggest taking a look at it, as it’s rich with scenery, history, and amazing people. The Irish are some of the nicest and most welcoming people I have ever encountered. If you ever find yourself Guying Around in Northern Ireland, do yourself a favor and hire a car and explore this beautiful coastline!

Guying Around in the Big Easy

Guying Around in Hanoi

It's not just a brand, its a way of life. #GuyingAround

In this feature, I will highlight different Guying Around Profiles. That means I will write about different people whom I

All Posts/North America/United States of America

Guying Around Profile: The Delco Guy